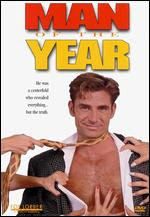 Heaven forbid that the centerfold models and beauty contestants who inflame our erotic fantasies turn out not to be who we imagine they are. If they are in fact impostors, what's left to believe in?
"Man of the Year," Dirk Shafer's mock documentary film about his adventures as a model for Playgirl magazine, gleefully sabotages the notion that sex objects are sacred objects. Displaying one's body for profit is, after all, a mild form of prostitution, and the most successful whores have always been those most adept at playacting.
Mr. Shafer, a clean-cut, all-American type from Oklahoma with show business aspirations, let a friend submit his physique photos to Playgirl magazine as a lark and ended up being chosen the publication's 1992 Man of the Year. Suddenly, Mr. Shafer, who is gay, found himself portrayed on the television talk-show circuit as the hunky heterosexual dreamboat of every woman's fantasies. Articulate, witty and flirtatious, he played the role extremely well. 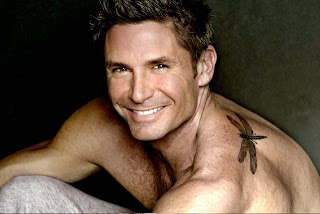 "Man of the Year," which Mr. Shafer wrote, directed and starred in, is a gently satirical remembrance of a charade that ended when a producer for one show confronted him with his deception and kept him off the program. In blending actual videoclips of his appearances on television with Jenny Jones, Phil Donahue and Joan Rivers with comic re-enactments of Mr. Shafer carrying out his man-of-the-year duties, the movie sustains a tone of vertiginous loopiness.
The heart of the movie is a series of interviews, with actors playing everyone from Mr. Shafer's parents (Cal Bartlett and Claudette Sutherland) to the editor of Playgirl (Beth Broderick) to Angela (Mary Stein), a woman from Reno, Nev., who goes on a magazine-sponsored dream date with him. Their night on the town gets off to a less-than-promising start in Mr. Shafer's hotel room, where she discovers his boyfriend, Mike (Michael Ornstein), hiding in the shower. (She is too polite to ask questions.) The lover, understandably, is not amused by the public persona foisted on him -- "Dirk's roommate."
Playing herself in the movie is Mr. Shafer's best friend, Vivian Paxton, who went on television with him pretending to be his girlfriend. The clips make it clear that Ms. Paxton's impersonation was crucial in Mr. Shafer's being able to carry off his act. Also appearing is Thom Collins, a one-time Playgirl hunk who went on to have a career as a drag performer, billed as "L.A.'s hottest trans-dancer."
The bogus documentary interviews seem intentionally unspontaneous and overacted. The most colorful character is a Southern stripper named Lady La Flame (Rhonda Dotson) who proclaims herself Dirk's biggest fan, blitzes his 1-900 telephone number with calls and ends up stalking his house in Los Angeles. She is far from pleased when someone in the documentary film crew informs her of Dirk's true sexual orientation.
"Man of the Year" conveys two messages, one frothy, the other sad. As it follows Dirk to an elaborate photo shoot, it demonstrates that centerfold perfection has everything to do with lighting and makeup. From a nice-looking man with a buffed body, Mr. Shafer is transformed into a glowering golden god. This surly deity bears only a distant resemblance to the real person, who is admittedly insecure about his physical attractiveness.
On a deeper level, "Man of the Year" treats Mr. Shafer's modeling experience as a metaphor for the way society pressures gay people to act straight. After watching Mr. Shafer wriggle uncomfortably inside the role he has agreed to play, it comes as a relief when he finally abandons it.
Regia e sceneggiatura Dirk Shafer;
Fotografia Stephen Timberlake;
Montaggio Barry Silver e Ken Solomon;
Musica Peitor Angell;
Con Dirk Shafer (himself), Vivian Paxton (herself), Michael Ornstein (Mike), Mary Stein (Angela), Cal Bartlett (Ken), Claudette Sutherland (Tammy), Thom Collins (himself), Rhonda Dotson (Lady La Flame) and Beth Broderick (Kelly).
Durata: 85 minutes.
Pubblicato da Carlo Prevosti a 07:26